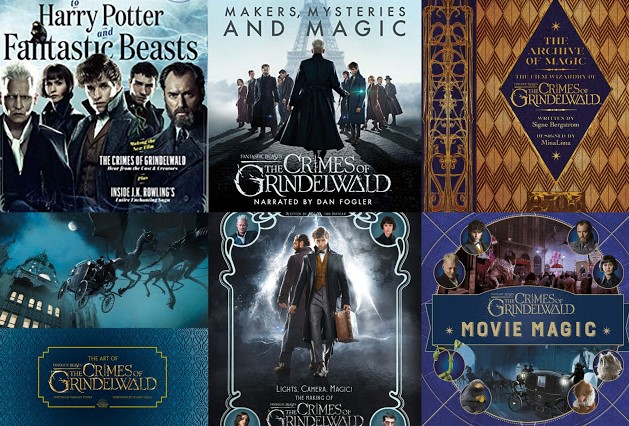 Something you need to know about me is that I am a GIANT Ravenclaw. Not like, in actual size, but I crave ALL knowledge, especially anything Potter related! So, naturally, I am an absolute sucker for any of the tie-in books. I even like to keep a list of all the fun facts I find in them that I want to remember! And when I say list...I actually mean multiple lists totalling about 81k words with page references PLEASE DON'T JUDGE ME. 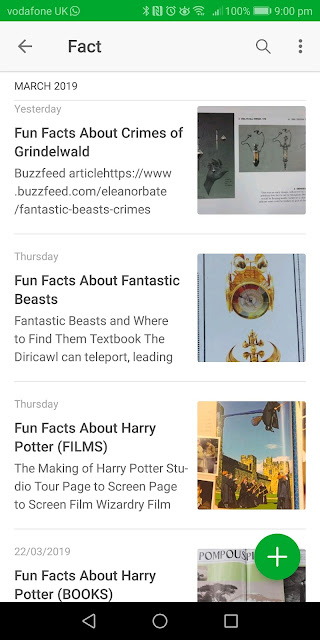 I often get asked which ones are the best if someone's looking for a gift, or wants to treat themselves, so I thought it might be helpful to review them! I'm hoping on turning this into a series (seriously, I have SO MANY), but I thought I'd start with the Fantastic Beasts: The Crimes Of Grindelwald ones first as they're the most recent (and also I freaking love that film, but more on that later!).

I'll try not to make this too long, but you might want to pop the kettle on! Milk and two sugars please 😉

Alrighty, so I'm going to include the books that were released in the run up to Fantastic Beasts: The Crimes Of Grindelwald that were mostly information from Fantastic Beasts and Where to Find Them, but had some information on the new film. I wasn't sure whether to include these or not, but I bought them mostly to see the new information, so I thought I might as well! I will also be rating them chronologically rather than in order of which I prefer. 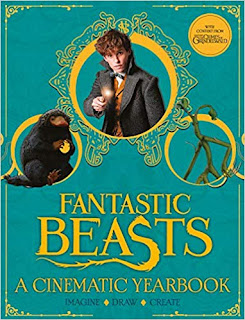 After I bought and read ALL the tie-in books for Fantastic Beasts and Where to Find Them, I discovered that I much preferred the HarperCollins ones, as the Scholastic versions are aimed at a younger audience, and have the same information in. I wasn't intending on buying any of the scholastic tie-ins for "Fantastic Beasts: The Crimes of Grindelwald"...so naturally they released them before the film came them out and they had new information in them that I COULDN'T RESIST. Man, I really must be their exact target audience, haha! This one was a fun read, and the new information was very cool and not something I had found anywhere else (and trust me, I was looking really hard!). A big selling point of this is the activities, but as I had this in a Kindle version I wasn't able to do them, and they were obviously aimed at a younger audience. Still a fun read ahead of the film's release though! 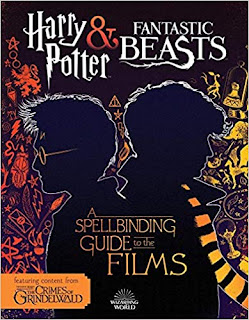 This one was also a really fun read, with lots of new information prior to the film's release, and I really enjoyed that it kept linking Fantastic Beasts back to Harry Potter. Also that cover is GORGEOUS.

Fantastic Beasts and Where to Find Them: Movie-Making News: The Stories Behind the Magic - Jody Revenson (HarperCollins, released 2nd October 2018) 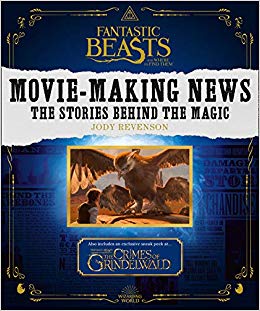 The cover of this is very cool, with the picture of Newt and Frank being lenticular, and I love the concept of it, but it just didn't seem to hit home for me. I think it's mostly because my brain found it very strange that it was in the Daily Prophet style but talking about the making of the film, so it was trying to be in the fictional world in non-fictional way. It was probably just me though! The new information was also pretty minimal, but that section was in colour which was fancy. 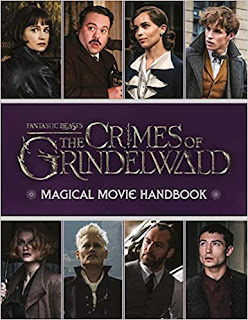 Another one I would not have bought if it hasn't been released before the film, but I wanted all that previous information! There was quite a bit of it in this one too, and some really cool pictures! I also really enjoyed that these were available as Kindle editions 'cause I love an instant download, and also I have NO SPACE for books as you can imagine! 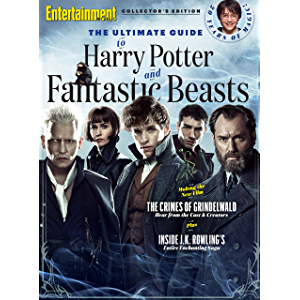 This one was pretty disappointing for me, as I have the version they came out with for Fantastic Beasts and Where to Find Them, and this one was just the same thing with a different beginning for the new film. If I remember rightly it was 40% new information and 60% recycled, which was a shame as it did feel a bit like paying for the same thing twice. 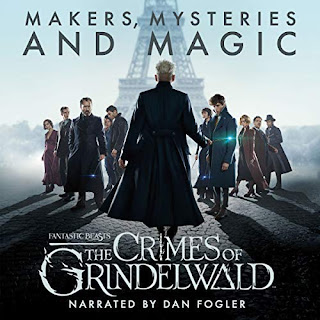 This is EXCEEDINGLY cool - I've never seen a behind-the-scenes audio rather than book before, and this was a very interesting concept perfectly executed. Dan Fogler is the perfect narrator, and it was really nice being able to hear from people you usually wouldn't - my personal favourite being the person who worked at the Warner Bros. Studio Tour and always wished they could have worked on the Harry Potter Films...and then managing to get a job on Fantastic Beasts! Not that I am jealous AT ALL 😜. The only drawback I found to this one is that it's spoiler free which I wasn't expecting as it was released at the same time as the film. I would have liked to hear more about topics that contained spoilers, but it is still a really fun listen.

The Archive of Magic: the Film Wizardry of Fantastic Beasts: The Crimes of Grindelwald - Signe Bergstrom (HarperCollins, released 16th November 2018) 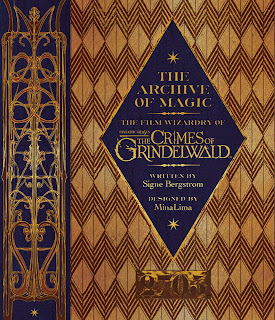 If you're just going to get one book about the making of Fantastic Beasts: The Crimes Of Grindelwald, it HAS to be this. This one is designed by MinaLima, so right away you know it's going to be gorgeous. It has really fun pull-outs and little extras, and SO much information it is a Ravenclaw's DREAM. I also pre-ordered mine in the summer from MinaLima's website so I could get a signed copy and it's so pretty! 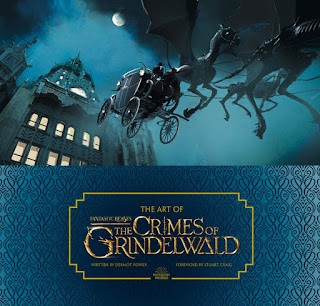 They released an The Art of book for Fantastic Beasts and Where to Find Them, and I loved seeing all the different concept art, so I knew as soon as I saw this that I wanted to add it to my collection. I just adore seeing how different things might have looked (especially the beasts!), and this one even came with a pull-out poster of the artwork from the dome of Ministère des Affaires Magiques de la France which is SPARKLY. Heck yeah. 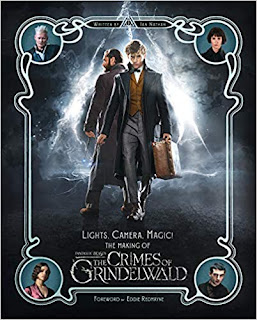 This one is very similar to Inside the Magic for Fantastic Beasts and Where to Find Them. It is full of interesting information, but a lot of it can be found in The Archive of Magic and it doesn't have any of the cool pull-outs. But, if you are on a budget it is much cheaper and still a wonderful read. 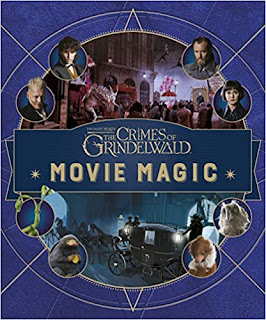 This series of Movie Magic books is aimed more towards younger readers, but they brought the first one out with an exclusive look at Fantastic Beasts and Where to Find Them just before that came out, and now I accidentally have them all. These ones do have fun pull-outs and cool facts.

There we go! Are you still with me? If you are THANK YOU, if you have wandered off to make another cup of tea or have a nap, I can't blame you 😜 If you've scrolled down here to see which is the best Fantastic Beasts: The Crimes Of Grindelwald tie-in book to buy - I highly recommend The Archive of Magic and the Makers, Mysteries and Magic audiobook. But seriously, if you're buying for a Potter fan they'll love anything!

Also, I know I said "knowledge" 12 times (I counted) but I just want to KNOW ALL THE THINGS!!

I am planning to do more tie-in book reviews, as well as taking you with me to visit some of the filming locations, showing my merchandise (I am currently building the big Lego Hogwarts and having the time of my life), and MANY other bits and bobs (seriously, you should see my list - it's GIANT). If you just want to see something specific, you can always have a look at the labels and the archive on the menu to the left (if you're on mobile you'll need to click the three little lines at the top to bring the menu up)