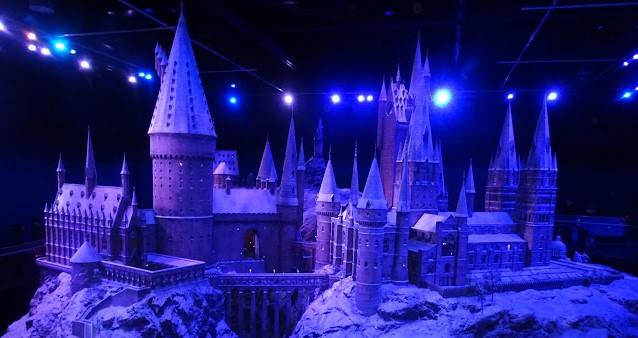 First of all, I thought I'd start with the location where the majority of the series was (and in the case of Fantastic Beasts, still is being) filmed - Leavesdon Studios AKA Warner Bros. Studio Tour! This is also a very apt post for today, as I have just booked to go back for my 5th visit to see the new Gringotts expansion and I am SO EXCITED, it looks incredible!

As I have been lucky enough to visit Leavesdon 4 times, each for a slightly different reason, I thought the easiest way to arrange this would be chronologically, so let's go!!! 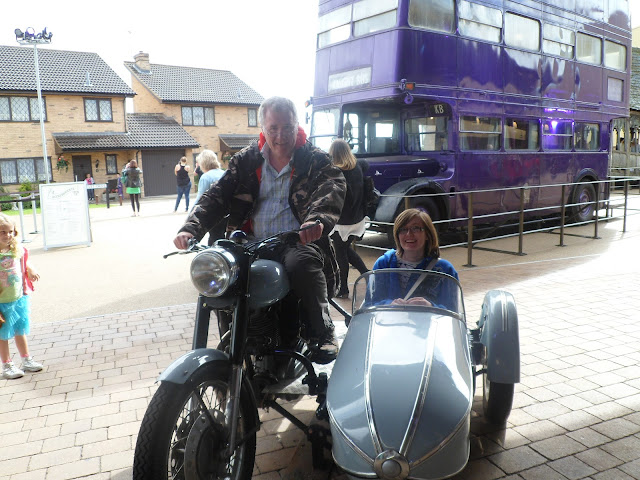 My first trip to the Studio Tour was back in 2013 for my mum's birthday...which admittedly was more of an excuse to go, as we'd been wanting to since it opened! This was also in September, so we saw the "back to school" exhibit as well, although there wasn't much too that, just the great hall dressed for the OWL exams. I went with both my parents, and worked a lot of extra shifts in the run up to it so I could go wild in the gift shop!


It was such an amazing day. Leavesdon is a fair drive from where we live, so although it is possible to go there and back in a day, I was assuming that this would be only only trip and really made the most of it. How little did I know!!!

My favourite part of the tour was definitely rounding the corner at the end and seeing the giant model of Hogwarts. I knew absolutely nothing about the tour beforehand and completely wasn't expecting it so it just completely overwhelmed me.

The Butterbeer is totally gross though. 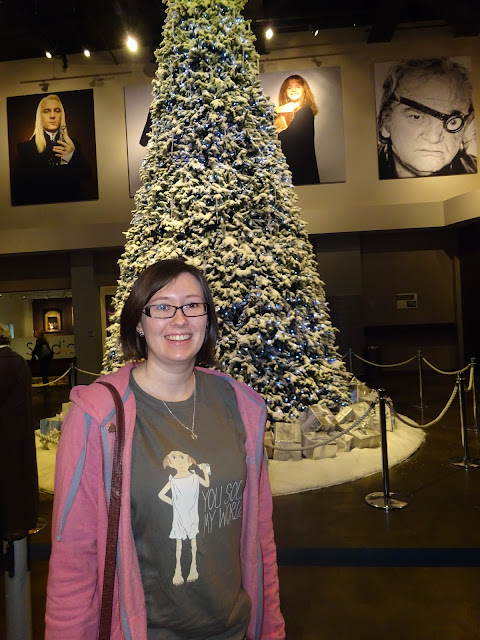 My second visit was, if you haven't guessed yet, at Christmas! This time I went with my parents and my big brother the day after Boxing Day in 2015. We had tried to book for Hogwarts in the Snow the previous year but left it too long and there weren't any tickets left, so I was thrilled to be able to go back at my favourite time of year, and show it to my brother too!

The best part of this trip for me was definitely seeing the great hall laid out for the Christmas feast, and everything decorated for the season - the dormitories had paper streamers, the ticket hall had giant trees, and Diagon Alley and Hogwarts were dusted with snow!


This was also the first tie we had seen Playform 9 3/4 which is spectacular, definitely another "round the corner and gasp" moment. 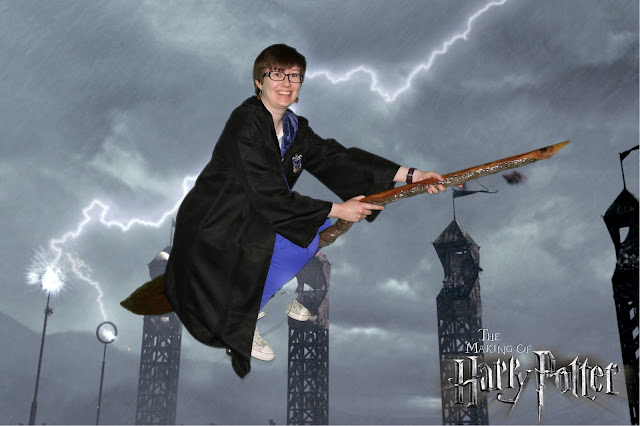 When the Studio Tour announced a new exhibit - The Forbidden Forest - in 2017, I begged my dad to take me again...admittedly I was 24 and fully capable of getting myself there, but as I despise motorway driving, he kindle agreed to go for the third (and final...or so we thought!) time.

This was my first time going completely dressed up, and I wore my Ravenclaw robes, and my dad even wore Slytherin ones! I had an absolute ball, I would definitely recommend dressing up!

As I thought this was REALLY our last trip, we got digital guides so we could get the most out of it, and I finally braved the queue to have my picture taken on a broomstick.

The Forbidden Forest section was very cool, but unfortunately not as big as I had expected. I am very glad we went though, as now they don't seen to show you the special effects like they did when we went anymore. When we went they only let a certain amount of people into the forest at a time and then set off the sounds, smoke and spiders, whereas now visitors can just push the buttons when they fancy. Still very cool, bu it doesn't feel as special.

On this trip we also discovered a new Quidditch section which I really enjoyed, went inside 4 Privet Drive for the first time, saw the costumes from Fantastic Beasts and Where to Find Them, and tried Butterbeer ice cream (which is MUCH nicer than the drink!). 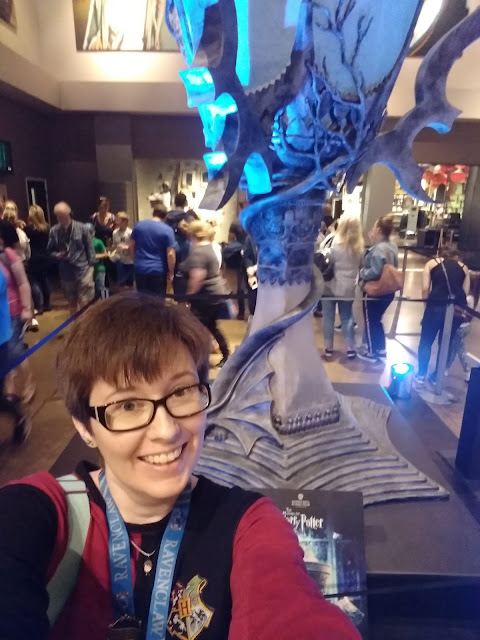 Flash forward to 2018, when I am already having Studio Tour withdrawals. I convince my dad to drive me up ONE LAST TIME (I'm sensing a theme here)...although he declined to do the actual tour himself and went to see the new Star Wars film at a local cinema!

Very luckily for me, a few days after I had booked my ticket (this was my first solo trip), they announced a special Goblet of Fire exhibition was happening right when my ticket was for, and I was thrilled I was going to get to go during with a cool event!

I REALLY thought this was my last trip (4th times a charm...right?), so I took as many pictures as my phone would hold, and spent a truly embarrassing amount in the gift shop.

This was also during the renovation for Gringotts, so the entrance had changed quite a lot and there was a lot of scaffolding - it was all very intriguing, and the big winging corridor you had to go down to get to the ticket hall was covered in the Marauders Map which was absolutely beautiful and made me cry.

Despite this being my 4th trip, it ended up being my favourite as I was free to spend as long as I wanted in each section without worrying if anyone was bored, and I absolutely loved seeing all the new additions like the giant Triwizard Cup (from the Goblet of Fire premiere), the Riddle's gravestone, the prefect bathroom taps, the Goblet of Fire itself spitting Harry's name out in the great hall and the addition of the Beauxbatons carriage to the Hogwarts model to name but a few!!

I really did think this would be my last visit to what has quickly become my favourite place, but before I had even got home I was already aching to go back and explore it again; so when Warner Bros. announced a Gringotts expansion, I was absolutely desperate to go. However, I didn't think my dad would want to drive all the way again, so I was planning on saving up for a coach trip, when this wonderful trailer played in the cinema one night when I was watching Pet Sematary with my mum:


She thought it looked fabulous, and she hasn't been since Christmas 2015, it's about time she went back, and that night we booked tickets. My poor dad is, again, driving us up and visiting the cinema! So THANK YOU Warner Bros. for such a fantastic trailer, and I can't wait to visit you again in October! We are also going during the Dark Arts event, which I've never been to before, so double the excitement!

As Starkid once said: "WE'RE GOIN' BACK!"

I can't recommend the Studio Tour enough. I know the tickets are a bit pricey and getting there can be tricky, but it's an absolutely incredible experience for a Potter fan, and you can stay there all day if you like! If you are planning a trip, I would definitely say the digital guides are well worth the money and so interesting. You can also leave any bags/coats/shopping in the back check for free which I have found very helpful.

Watch this space for my 5th trip - I'll be sure to blog all about it! I am currently planning a Niffler cosplay, so prepare for some pretty rad photos 😂