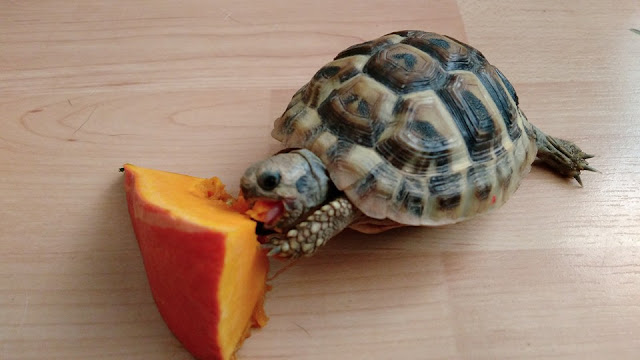 Hello and Happy Saturday!
Today is a special day for me - it's Dobby's gotcha day! As I mentioned in a previous post, I own a tortoise called Dobby, and today marks 4 years since he walked (rather slowly 😜) into my life, so I wanted to honour it with a post just for him!

He has recently had a renovation of his tortoise table (including lots of Harry Potter touches, of course) and I wanted to show you.

This is what his tortoise table used to look like: 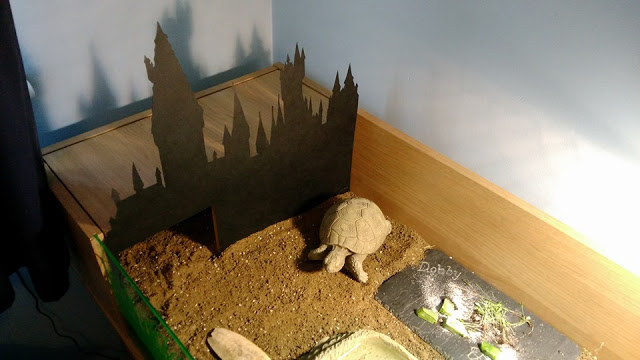 My fabulous best friend made the cardboard Hogwarts to attach to the little enclosed space, but Dobby just wasn't using it: he much prefers basking under his heat lamp. It seemed a shame to waste some space that he could be using, so I set to work!

I wasn't actually sure if it was possible to take the partition out and make the whole table open, but I had seen pictures of someone else who had done it with this design of table, so I thought it was worth a try. I am terrible at DIY, so my lovely dad helped me to take the roof off, and when we were stumped by the other section, my sister-in-law crawled underneath it with an allen key to unscrew it.

Unfortunately, this extra space did come with a price: I had been using the roof the enclosed space (that I liked to call his hide-y hole) to store things, so my dad had to put up some shelves just above, to store all of Dobby's things. They are really useful, and now Dobby finally has somewhere to show off his collection of Dobbys! Yes, I didn't miss an apostrophe there: I mean Dobby in the plural!

I have developed a terrible habit of buying Dobby a Dobby every time I see one, so he has quite a collection now! I realise that it is very extra to have merchandise shelves for your tortoise, but that's just who I am 😂. 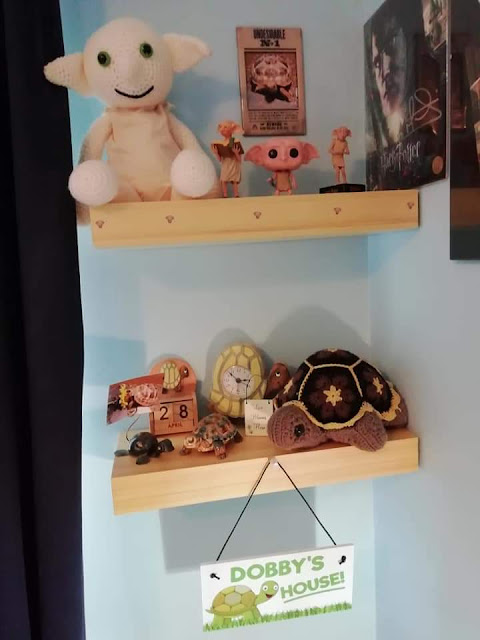 As you can see, the bottom shelf is reserved for all the tortoises I have also acquired. The crochet tortoise and Dobby in the picture are actually made by me - I'll be doing a post at some point about all my knitted and crocheted Harry Potter things, so be sure to keep an eye out for that, I think it might have to be a two-parter!

If you've got a keen eye you might have also spotted this hilarious magnet stuck on the wall, but if not here's a close up: 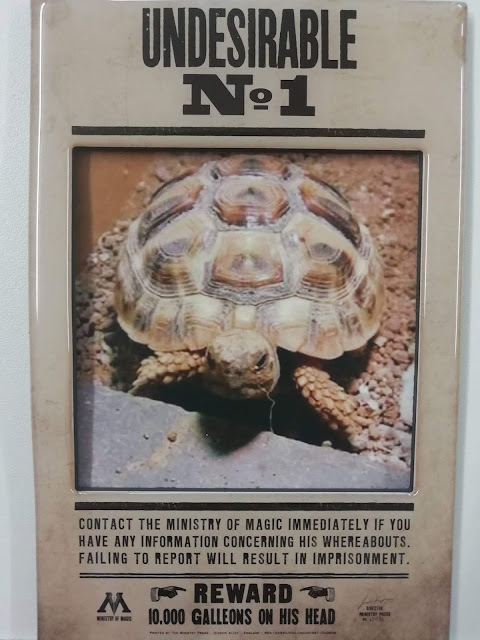 Isn't it hilarious? When I bought it I just knew I had to put a picture of Dobby inside - he's such a grumpy pot!

He does seem to be enjoying having more space in his table now though. I've even bought him some tortoise-friendly fake plants to make it look a bit nicer, but he does keep pooing on them so I'm not sure he's too impressed.

At least it's almost summer - he has a different enclosure in the garden which I put him in when it's warm enough and he loves being outside; sometimes he actually looks like he might be smiling!