How I joined the "Harry Potter" Fandom. 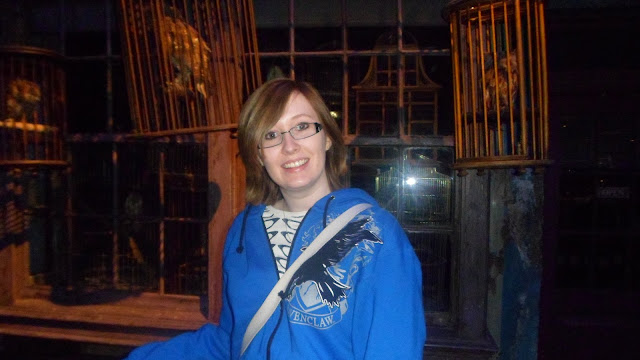 Hey there!
I was hoping to be posting about visiting Lacock Abbey today, but unfortunately in the UK we're experiencing a mini-heatwave so it was just too hot to be outside all day. I don't live to far away though, so I will hopefully get there sometime this summer and I'll be sure to tell you all about it!

In my previous post about Wizard Rock, I mentioned that I was very late to the Harry Potter fandom, so I thought I'd use today to explain that more. It is something I have always been ashamed of and used to try and hide because I thought it made me less of a fan, but lately I've realised that it doesn't. Just because I missed the books as they were being released doesn't mean I love the series any less. Of course I wish I had been in the fandom when the books and films were being released, as that would have been incredible to experience and I'm so disappointed that I missed that, but I'm still a valid fan. I don't need to prove myself by dressing head-to-toe in merch (although I do enjoy doing that!), or shouting louder than anyone else about my love for Potter: I just love it and that's enough.

I was actually the perfect age to love the books as they were coming out, but it just didn't click for me. Don't get me wrong: I read them when they were released (except Hallows), and saw most of the films opening weekend. I had Chamber on audio cassette and always spent a day during the summer holidays listening to Stephen Fry's Moaning Myrtle. I enjoyed the series, but I didn't love it.

Fast-forward to 2013 (ish) and I'm at University, having a bit of a rough time. I went to University thinking everyone would be sitting around drinking tea and reading books and ended up sharing a flat with people who were partying all the time. I pretty much just lived in my room, and came home every weekend. I was feeling like a failure for not fitting in, and not enjoying my time at University which you're always told is supposed to be the best time of your life.

One day I decided to watch a Harry Potter film (I can't remember which), and watching the films I had enjoyed in my childhood really helped: it was like being reunited with long-lost friends. I watched them over and over and over and over again. I watched them so much my mum booked tickets to the Studio Tour (which I blogged about here). I remember re-watching all the films in the run up to our first visit (where the photo at the top was taken - in front of Eeylops Owl Emporium in Diagon Alley), and then coming home and re-watching them all again to point out what we had just seen!

After this I picked up the books for the first time in 10 years, and read Hallows for the first time ever (which is now my favourite). And something just clicked. I'm not sure if it was because I was reading them for the first time as an adult; but I started to notice all the hilarious word-play, clever connections between the books, and real-world connotations of events. I took to the internet and discovered the giant, amazing fandom. And I was hooked.

I've always been a passionate person: I never do things by halves! So I dove head-first into this incredible fandom full of wonderful people, and I fell in love with it. Every time I re-read the books (which I now try to do once a year) I fall even more in love with this wonderful wizarding world and the inspiring characters in it.

You can imagine my excitement when Cursed Child and Fantastic Beasts were announced; having just started loving a series that I thought finished. I thought I'd missed my chance to be a part of this fandom when new things are being released but I didn't! I get to go to midnight screenings in Hogwarts robes, discuss theories, and break down trailers, and I am so very grateful for this. I might have missed it the first time, but I'm sure as hell going to make the most of it now I have another chance!

I've even made friends with other fans who were also late to the party, which finally made me stop beating myself up for it. I can still love something even if I found it a little late. And you can too! Never feel like you're not a "proper" fan. If you love something, you love it. Don't let anyone (including yourself!) tell you otherwise.

And that's my story! I would love to hear how you discovered the Harry Potter (or any other) fandoms, and your favourite experiences being a part of it.

Until next time,
Don't let the Muggles get you down! ❤️

(This post was written while listening to Harry and the Potters' new album: Lumos! I cannot recommend it enough!)