Hello,
Sorry, it's been so long!

The last few months have been a bit difficult for me - I've been closing down my wool shop which, as you can imagine, has been an emotional time. I am now working on dismantling all the shop fitting which is proving hard work, so I'll most likely be posting sporadically until everything it finished, but hopefully it won't be long.

I have actually been working on some Newtina (Newt Scamander and Tina Goldstein) FanFiction though, so I'll be posting that when I'm finished!

But tday I want to talk about my custom Harry Potter art by the very talented Naomi Lorde.

I'm a big fan of fan art (heehee), and have been following Naomi on Instagram for quite some time. As well as drawing characters from various series', she also creates custom Hogwarts portraits, which are just the cutest! She has an Etsy shop where you can purchase prints and stickers of her various designs. I have this adorable one on my wall: I can never resist a Niffler! 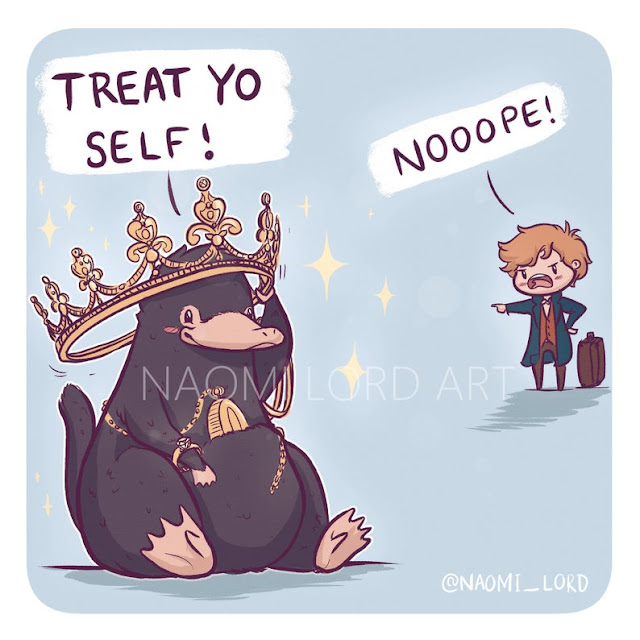 I had been eyeing up the custom Hogwarts portraits for about a year, and entered many giveaways to win one but had never been lucky enough. They are only released on Etsy in batches, as Naomi can only do so many at once, and I kept just missing out.

BUT, one day I happened to look at her Etsy and saw a new version of the Hogwarts portraits! They usually involved your cartoon character standing in front of Hogwarts castle in your house robes, but for Christmas last year Naomi released a special Forbidden Forest edition where you are standing outside the forest in a Weasley jumper and house scarf. If you know me you'll know I LOVE Christmas and jumpers, so I just couldn't resist, and decided to treat myself! After all, the Niffler would! 😉

It was a very easy process - Naomi just needed to know your distinguishing features (along with a photo of yourslef), what colour you wanted your Weasley jumper and house scarf, as well with what animal you wanted to sit on your head. The animals can also be patronuses, and I had a hard time deciding whether to have my tortoise, my dog or my patronus, but in the end I went for the Niffler because I just love him so much! You could also ask for anything else, so I asked for the Niffler to be wearing some kind of knitwear, so she gave him this adorable bobble hat! 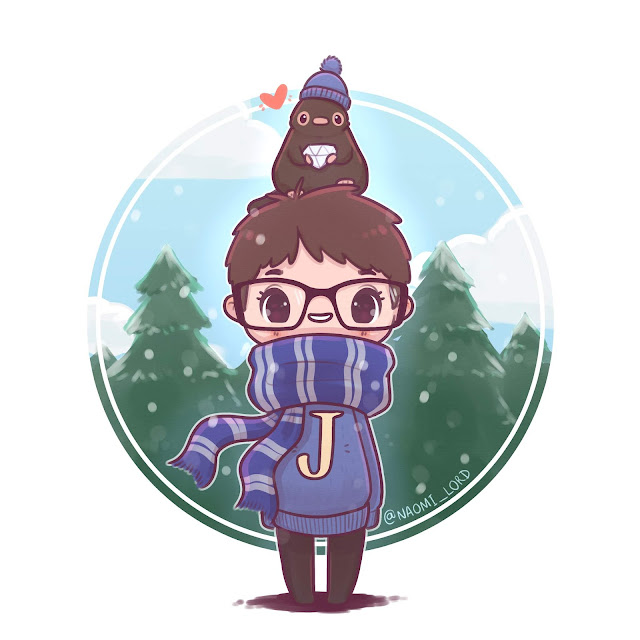 Isn't is fantastic? It's now my profile picture for every social media platform ever, as well as my phone and computer background. Naomi really managed to capture "me" in cartoon form, and put me in my favourite place in the world!

Last Christmas my Auntie actually made me my very own Weasley jumper, so we took a picture just like my custom portrait; doesn't it look like a weird game of spot the difference?! 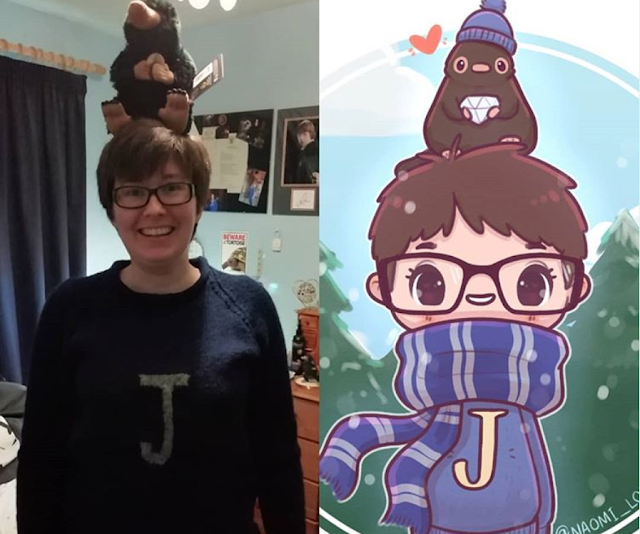 I absolutely adore my portrait, and am so glad I decided to get one! I think I look right at home at Hogwarts, don't you?

I hope you have a magical weekend! ⚡
Labels: Fantastic Beasts Harry Potter Merchandise