Seeing "Harry Potter and the Cursed Child" in London! #KeepTheSecrets 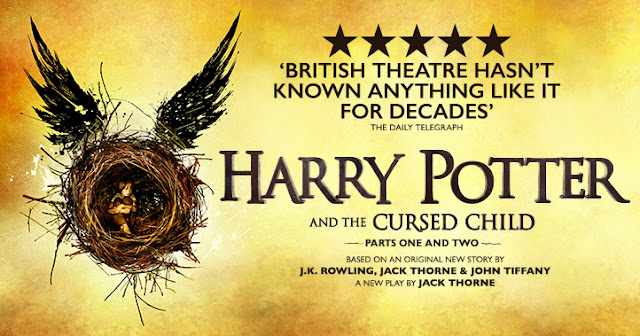 I hope you're all having a magical week! ⚡

In honour of today being 3 years since the previews started, today I wanted to talk about when I was lucky enough to see Harry Potter and the Cursed Child in London!

When the play was first announced, I thought I'd never get to go. I am not too far from London, but just far enough that it makes it a bit tricky to do it all in a day, and staying overnight gets expensive. I'm also not the biggest fan of travelling on my own, and none of my friends and family were willing to sit through 5 hours of Harry Potter; which is understandable if you're not a big fan! I was hoping it might eventually tour and come to my local theatre, but as time went on and it opened in more and more cities I realised that as London wasn't too far from me, that wasn't likely. I resigned myself to the fact that I would probably never get to see it.

I had read the screenplay though, so I did know what happened. I remember staying up until midnight (having my own little release party!) for it to download onto my Kindle, and reading the first part before finally falling asleep. I felt the same way a lot of fans did at the time: I wasn't impressed. I'm not used to reading plays and for me all the characters just seemed off. The people who I felt I knew so well were doing things I wouldn't expect, and it didn't sit right with me.

But as I kept hearing more and more people that loved the play saying that they had seen it before reading it, I knew I wanted to give it a go. Even if it was just to see the special effects on stage! One evening, as I was lamenting not being able to see it, having looked up the train times and realising it just wasn't possible to get there and back in a day, my dad offered to drive me. If you know me, you know I hate driving, and do everything possible to avoid it, so there was no way I was driving into London and back myself, but this was a great opportunity to finally see it!

It did take a lot of organising, and involved my mum getting the day off work to man the shop, and my dad to take two days off work as he was picking me up (the last train leaving an hour before the play ended) at 10pm, meaning we'd get home around midnight.

Luckily for me, just as we were working all of this out, there was an announced that more tickets would be released the following week,  and I was even luckier to manage to get tickets for the day I wanted for the bargain price of £40 (for both parts). You do have to book quite far in advance though - I booked in April 2018 for January 2019 - but I had a countdown on my phone and enjoyed seeing it slowly tick down!

True to my house, I did A LOT of research in the run up, as I hadn't been to London in about 10 years. I decided that while I was there I might as well make the most of it, and planned to get there early do to the giant Potter Primark, The House of MinaLima, the Noble Collection shop and Kings Cross. This turned out to be a bit too ambitious, and I only made it to Primark and MinaLima, but I am actually going to Kings Cross on September the 1st this year to see off the Hogwarts express (my first time!), and I also intend to go to the Noble Collection shop then too, as well as do a Harry Potter walking tour! There will, of course, be a post on that shortly after.

When I arrived in London, I headed straight for the Tottenham Court Road Primark, which is the one with the big Harry Potter section. It certainly didn't disappoint! 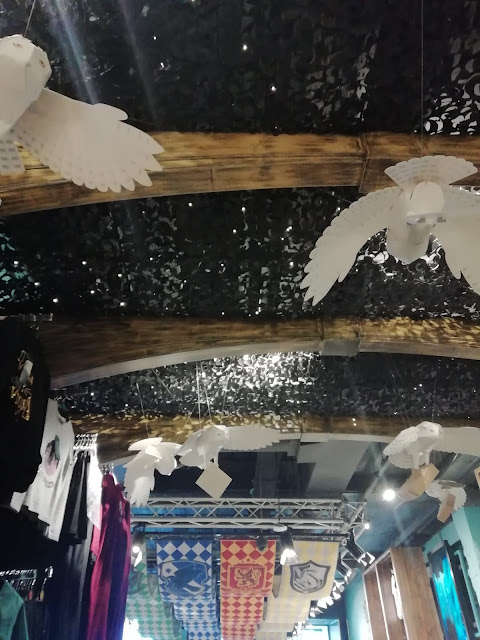 Unfortunately the Palace Threatre (where Cursed Child is based) only allows you to take in 1 bag of a certain size. I had picked my biggest bag that fit the requirements, but I still didn't have a lot of room so I knew I couldn't go crazy! So in Primark I just bought some pyjamas (I have a tradition of wearing a new pair when I go on holiday so these are my holiday pjs for this year!) and a little Hagrid picture stand that I have put a picture of me outside the Palace Theatre in.

After Primark, I made my way to the Palace Threatre to make sure where it was, and found The House of MinaLima which is just around the back. This is an exhibition (free entry!) of their work on Harry Potter and Fantastic Beasts and is definitely worth the visit. There are all these little touches like Hogwarts acceptance letters all the way up the stairs, and the people who work there are very informative. Did you know that Miraphora Mina's mum is a jeweler so she draws inspiration from her when design jewelry? I didn't!

As I visited not long after Fantastic Beasts: The Crimes of Grindelwald was released, there was a whole section made up to look like the Circus Arcanus; it was incredible! 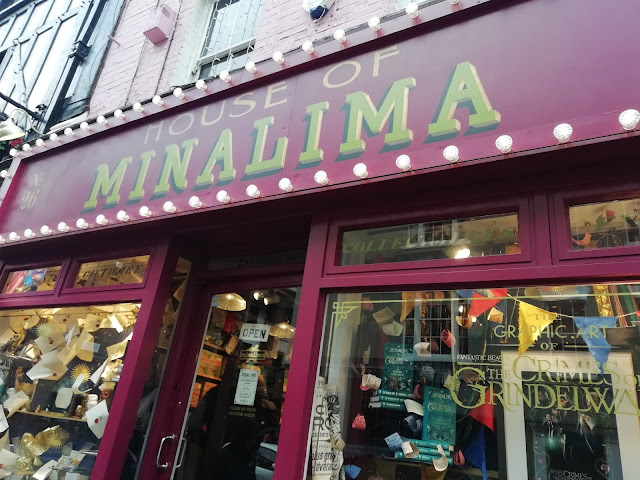 There is also a little shop here, and I bought some postcards, a Black family tree tapestry magnet and some Harry Potter letter magnets. The things are more on the expensive side, but they're exclusive MinaLima designs and absolutely gorgeous.

Once I'd done MinaLima and had a bite to eat, it was time to queue! You are asked to queue an hour before the play starts; I actually got there a little earlier than that and saw it was already rather long and joined it. You do go through a security check before you are allowed in, but it was quick and easy and everyone was very helpful at making sure you're in the right place.  The theatre itself is beautiful, you have to get the signature shot of you in front of the nest! It was even more gorgeous lit up at night, I spent quite a while just gawping at it! 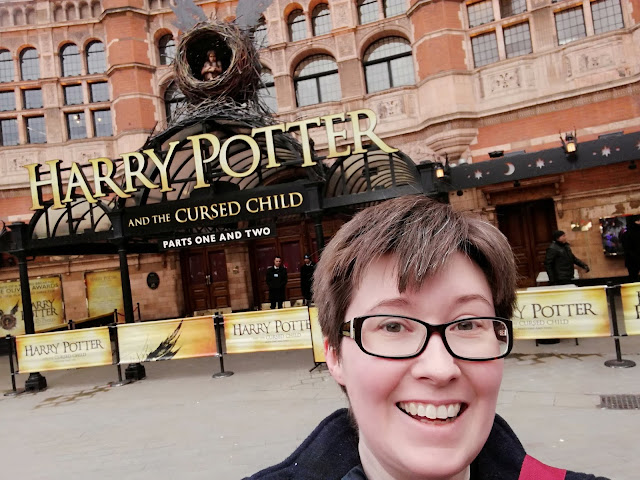 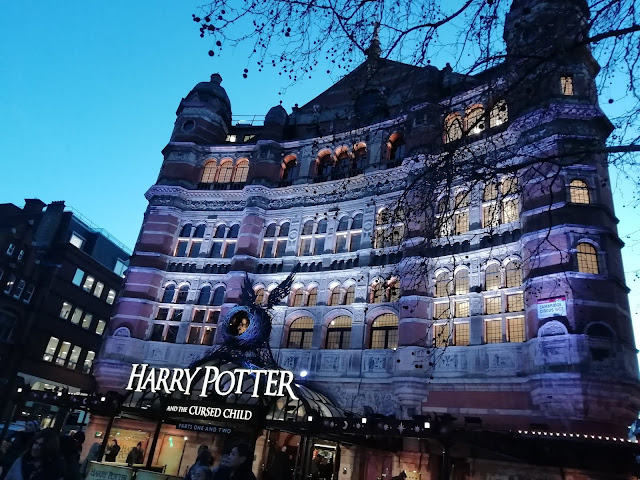 You aren't allowed to take any food or drinks inside (as it usually the case) and the the ones in the threatre are a little pricey, but I had budgeted for that and got myself a diet Coke and a packet of Malteasers and settled in!

I was very impressed in my view for the price - prices range from £30 (for both parts) to £145, so my ticket price was the lower end but I still had a great view. 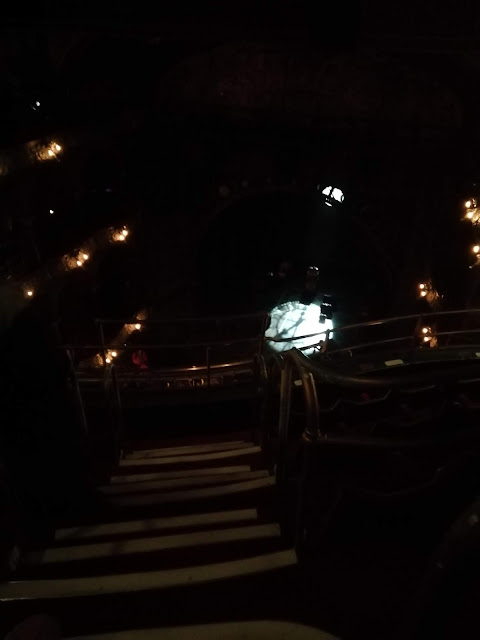 I was in the balcony in seat E7. The balcony is quite high up, so I definitely wouldn't recommend if you don't like heights, but it didn't take long to get used to, and by the time the play starts I didn't really notice. I did pay £1 to use those little binoculars so I could see the actors faces better, but I found that when I was zoomed in so closely on them I missed what was happening at other sides of the stage so I didn't use them for the second part.

I have heard complaints about the leg room (the theatre seats 1,400 so there's not huge amounts of space) but I didn't have a problem. Due to the amount of people the theatre holds, I would recommend booking somewhere to eat between parts 1 & 2 though; I didn't do this assuming I'd find somewhere easily and a lot of places were fully booked!

I won't spoil anything (#KeepTheSecrets), but I absolutely loved it. The things in the screenplay I didn't like played out so much better on stage; the music was incredible (you can now actually buy the CD); the special effects mind boggling. I spent a lot of it crying because I was so happy to be there, and also so sad that I'd likely never get to see it again! I wouldn't definitely recommend it, even if you didn't like the screenplay. Even if you don't end up liking the play, you can get the cheaper tickets are marvel at the stage production.

I would absolutely love to go back at some point if I can, it was just amazing and I loved every second. If I do manage to go back I might save up and go all out and get amazing seats! 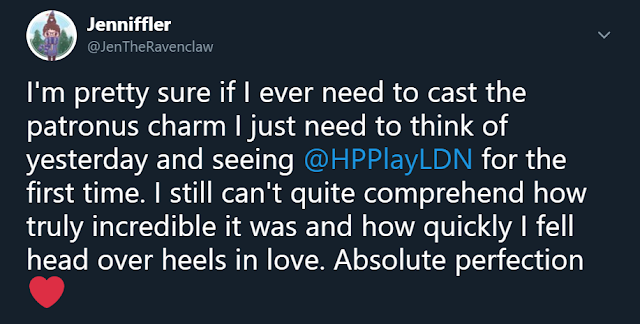 Now, I know what you're thinking; Jennifer, surely you bought some merchandise?!? You would definitely be right! I saved up, knowing it'd probably be my only visit, and went WILD. 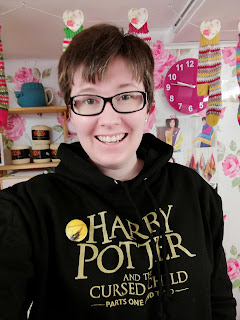 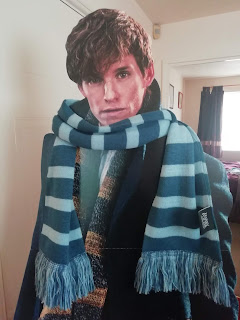 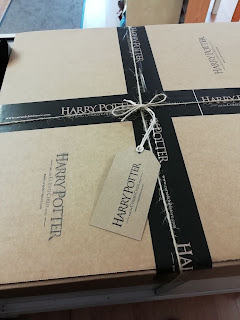 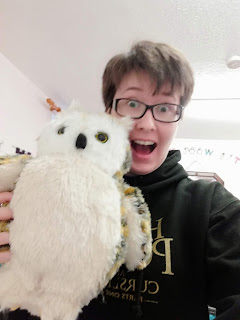 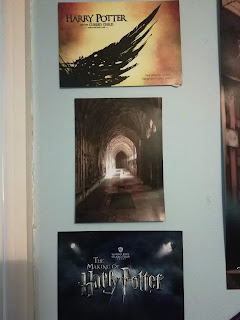 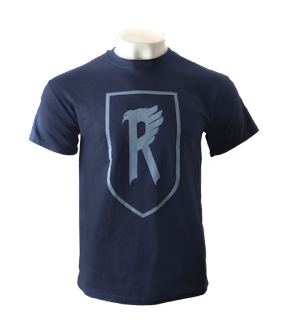 As you can see I got a hoodie (which I wear ALL THE TIME - I am actually wearing as I type this!); a Ravenclaw shirt and scarf, as my wardrobe is rather lacking in hour pride (I had to take the picture of the shirt from their website as mine's in the wash!); an owl plush (which I actually ordered from their website when I got back as I regretted not buying it - that's what was inside the gorgeously wrapped parcel); a postcard (as I am visiting filming locations I am buying postcards so I can create a whole wall of them. I know the play isn't a filming location but I got one anyway. In the picture you can also see the ones from Lacock Abbey and the Studio Tour). Not pictured are a LOT of pens as I bought one for myself and a lot for friends and family (I might order more at some point as they write beautifully); a poster that now hangs in my room; a programme to read during the interval; and a pin so I can show my love for the play when I'm not wearing my shirt or hoodie!

Wow, that's a whole lot of merch! I'm also toying with getting the Cursed Child shirt, Scorpius' wand and more pens, but I think I might ask for those for Christmas, or save it until I see it again!

If, like me, you are waiting with the hopes of seeing it again, or are just interested in seeing behind-the-scenes, there's a new book out this October 31st: Harry Potter and the Cursed Child: The Journey. You know I love getting more information, so I have pre-ordered it and am really looking forward to giving it a read. I will, of course, be posting a review when I've finished it! 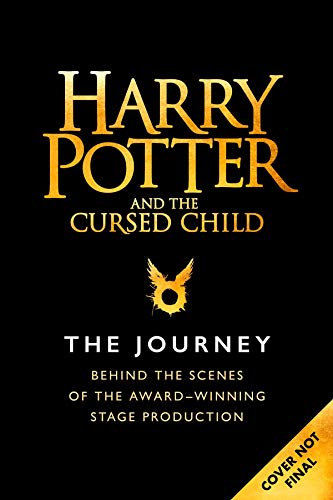 And there we have it! I hope you've enjoyed reading about my visit to London, I've certainly enjoyed re-living it in my head!
Remember, don't let the Muggles get you down ❤️
Until next time!