"The Cupboard Under The Stairs." Bones Fanfiction. 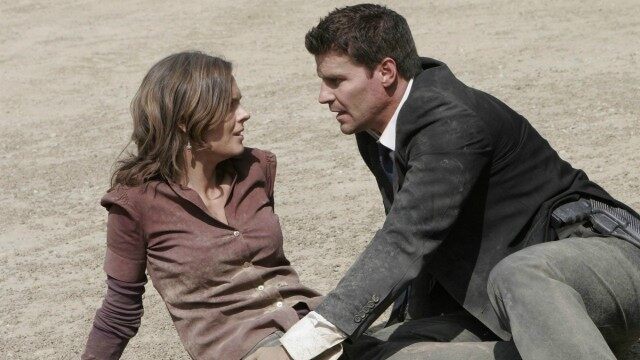 I've got a bonus post for you today! This isn't Harry Potter related, but I thought you might like to see it anyway! In my first fanfiction post, I mentioned that I was a HUGE Bones fan back when the series first started: it was actually the thing that first got me into fanfiction and fan videos and fandom! I've been re-watching series 1 this week, and had a strange dream last night that turned into this fanfiction. I did almost give this idea to Newt and Tina, but it just didn't seem to fit with them. It just seemed so Booth and Brennan, so I went back to my fandom roots!

I hope you enjoy it! And if you haven't checked out the series, I definitely recommend it!

Booth jerks awake suddenly, his eyes scouring the room for the noise that disturbed him. All is quiet and still. After a few moments, reassured that it must have been something in his dream, he rolls over and his heart stops: the other side of the bed is empty.

He leaps out of bed in one fluid moment, rushing between the rooms checking for any sign of her. His heart pounds painfully in his chest as he takes the stairs three at a time and begins to frantically search those rooms too, calling her name.

“Bones?” His voice is high with panic. “Bones, where are you?”

A whimper, so soft he almost doesn’t hear it over the thumping of his own heart. He spins on the spot, his sniper senses kicking into overdrive as he sprints in the direction of the noise.

“Bones? BONES!” Another whimper, closer this time. His brows furrow in confusion and concern as he tentatively grips the handle of the door to the cupboard under the stairs and turns, opening it slowly, every sinew of his body braced to defend her. His breath escapes him as he catches sight of her, and the tension leaves him as quickly as it came. She’s okay. She’s safe.

Shaking, wide-eyed with fear and embarrassment, she’s huddled at the far end of the cupboard, a blanket pulled tight around her like a shield.

“Nightmare.” She breathes, her eyes filling with shame.

“Can I come in?” He asks, crouching down to her level so as to not frighten her further.

She nods once, her gaze sliding from his.

Booth does so, crawling forwards and manoeuvring his bulk past years of detritus - paint cans, cleaning supplies and shoes. He tries not to think of how many spiders are lurking in the corners.

It’s too dark to make anything out at the back of the cupboard, so Booth follows the sound of her ragged breathing, until his fingertips brush her toes. She starts and there is a loud thwack and soft “ouch” as her head hits the back wall.

“It’s me,” he reassures. “It’s okay”. He presses his back into the wall and gathers her in his arms.

His heart clenches as he feels how much she is shaking and she lets out another involuntary whimper. He pulls her even tighter against him and rubs soothing circles on her back.

“Shhh. It’s okay. You’re safe. I’ve got you.” She buries her head into his neck as her body relaxes and tears prick her eyes.

“Sorry.” She mumbles, her voice breaking.

“You’ve got nothing to be sorry for.” He says sternly. “Besides, I’ve always wondered what was in this cupboard.”

He feels her laugh more than he hears it - a harsh breath on his neck, making his skin tingle and raising goosebumps.

“Probably loads of spiders though.” She says, settling herself more comfortably against him, and loosening the blanket to wrap him in it too. It smells like her - vanilla and cherry and flowers.

“Yeah.” He agrees, “really big ones, I bet.” Neither of them make any move to leave though, as her breaths deepen and she slowly calms. He presses a kiss to her forehead. She’ll be okay.

I hope you all have a magical weekend! ⚡