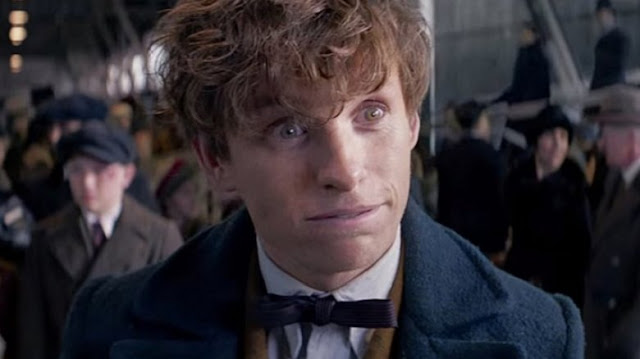 I've got another little short fanfiction to share with you today. I am really enjoying writing these! This one was inspired by the forward to the Fantastic Beasts textbook, where Newt says he had to beat some beasts off with his travelling kettle. I was really hoping we might see it in the films, but so far no luck! This was originally going to be the story of when Newt had to fend bests off with his kettle while researching for his book, but it accidentally turned into something else. I still really like it: I enjoy these little quiet moments we don't usually get to see. And I ❤️ tea! Maybe in my next post I'll show you my tea collection!


Newt sighed; it had been such a long day, and he so was glad to finally be home, to be back where he belonged - with his beasts. He climbed the ladder down into his case and opened the door of his shed. Everything was exactly as it should be: everyone was in their rightful place, and all was well with the world. At least for now. He felt an invisible weight lift from his shoulders and smiled for the first time all day.

“Mummy’s home!” He shouted, and was greeted by excited shrieks and howls. A few of the Mooncalves trotted up to him and he patted their soft heads.

“I’ll get your dinner for you in a moment,” he told them as they followed him back into his shed, “but first, how about a cup of tea?”

Newt pulled his trusty travelling kettle out from under the counter, filled it with water and set it on the stove to boil, carefully spooning some loose leaf Orange Pekoe into a teapot.

This was his favourite time of day: the calm, quiet moment in-between work and feeding the animals, when he was allowed to just be. And drink a really good cup of tea.

He felt something nudge his hand and looked down. Of course. The Niffler was perched on the counter, reaching for the teaspoon, his little nose quivering in anticipation.

“Oh, no you don’t,” Newt scolded, moving the teaspoon out of reach. The Niffler gave him a hard stare before jumping off the counter and disappearing out of the door. Newt knew he would probably pay for that later, but he couldn’t lose another teaspoon to the kleptomaniac: he already went through them at a rate that was causing raised eyebrows and questioning glances.

The kettle began to boil, the lid rattling gently as is steamed. Pouring the water into the teapot he can’t help but notice all the dents, scrapes and teeth marks that now adorn his once pristine brass kettle. Oh, that kettle certainly had some stories to tell…
Labels: Fanfiction Fantastic Beasts