Sorry I haven't been able to write this sooner, but I've been very busy this week painting and generally doing boring life admin stuff. I do have quite a few posts planned about my time in London on Sunday though, so hopefully that will make up for the delay!

I am starting a new job next week (yay!) so I might not be posting as frequently, but I will still try and do once a week or so, even if it's just more fanfiction (I'm having so much fun writing them).

Last year when I saw all the back to Hogwarts videos, and Jude Law and Eddie Redmayne at Kings Cross I made a pact to myself to go one day. As it fell on a Sunday this year, it was pretty perfect timing! It is quite a journey for me to London though, so I decided to make a day of it and do a Harry Potter walking tour too (this will be a separate blog post). When I mentioned it to my fellow SpeakBeasty social media witch Samantha, she asked to come too and I am so glad she did: it was so much more fun having someone to share it with! (We also shared a lot to SpeakBeasty's Instagram stories, which you can still see in the "September 1st" highlight.)

I was very tempted to wear my robes, but as we were also going on a walking tour I thought I might feel a bit self-conscious walking around London! I had ordered a shirt from EMP though which arrived the day before and I loved, so I decided to wear that. It combines my three favourite things - Hogwarts, Newt and Hagrid! 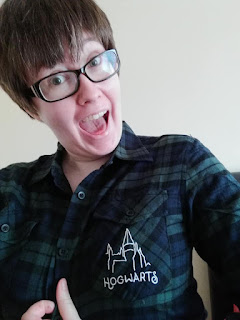 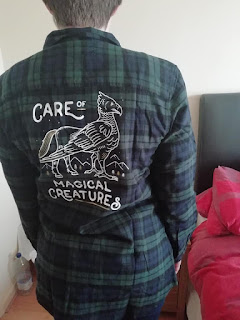 Unfortunately, although a Sunday meant we didn't have to worry about work, we did have to travel to a train station further away from our home town in order to get to London for 11am. There was a lot of work being done on the train lines so our train was heavily delayed, but we had plenty of snacks (sherbet lemons, of course), and it was nice watching the world go by. 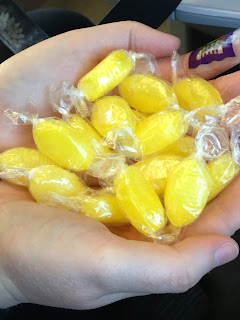 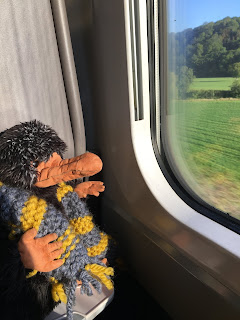 The train nightmare didn't stop there though: when we got to Paddington (very late, already running a risk of missing 11 o'clock altogether), the tube we were supposed to get had been cancelled, and we weren't sure what to do. In a stroke of luck, I recognise someone getting off the train - Laura from Laura's Always Pottering, who knows London like the back of her hand, and was on her way to Kings Cross too - so she kindly let us tag along and we got there with 20 minutes to spare! 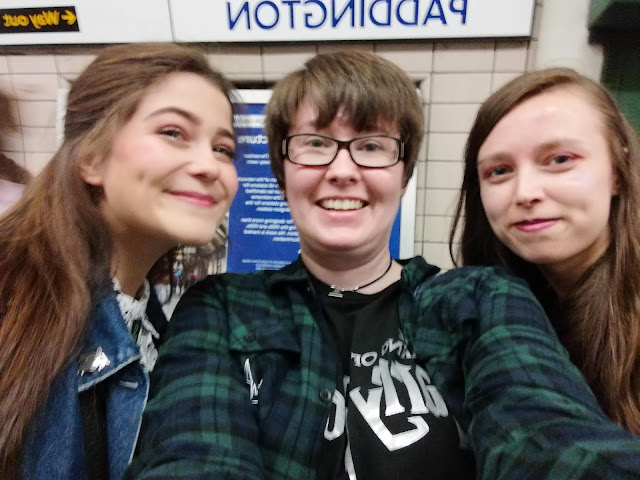 As we had a little time to kill, we decided to get our pictures taken first. We had bought VIP tickets which meant we could skip the queues and didn't have to pay for our photos. I would definitely recommend them, especially if you're going on a busy day like September 1st - the queue was gigantic! 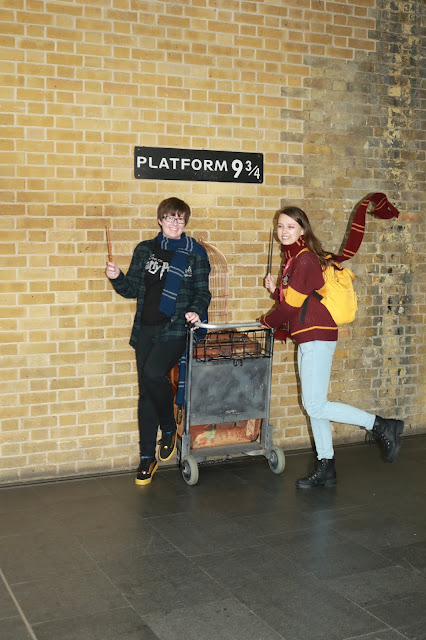 Once we had our photos, we nervously awaited 11 o'clock. As we arrived fairly late, we were quite close to the back of the crowd and kept having to explain to passing commuters what was happening - when it's such a huge event for Potter fans it was strange to think of people not knowing what was happening! 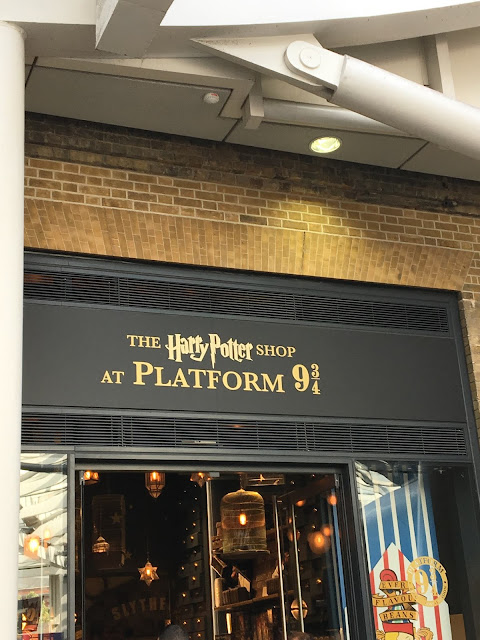 As usual, there was a special board up just for Hogwarts - fancy going to Edinburgh via Hogsmeade? 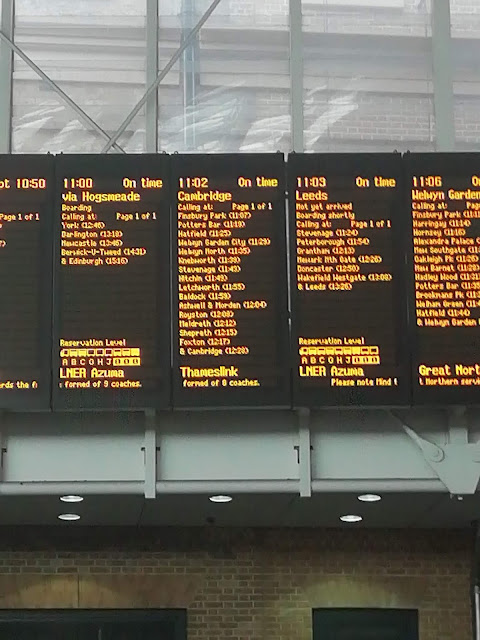 As it got closer and closer to 11, the boards started to play a Lego recreation of Harry getting on the train, which I thought was a really cute touch.

With 20 second to go, the countdown started. I got completely teary-eyed at this, and was very happy that I decided to forgo mascara. You might notice some people are shouting "Lily Luna" - that's because it's her (and Hugo's) first year at Hogwarts! I wonder what houses they got sorted into?

Once the countdown had finished, we could hear music and see wands in the air. It was tricky to tell from where we were standing but I thought it looked like the wand dance from Cursed Child. When we managed to get closer we realised that it was - the current cast from the London production made a special visit to do the wand dance. They even had the fire and special effects! 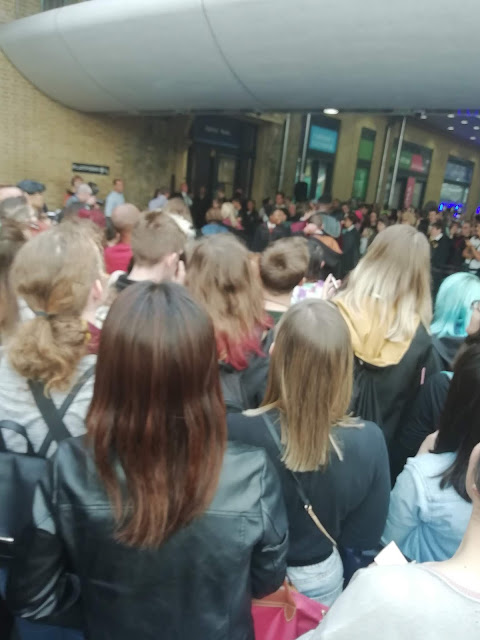 The event has certainly come a long way from a few fans turning up to celebrate!

Once we'd been to the Platform 9 3/4 shop (more on what I bought in a later post!) we decided to make the tube trip to Noble Collection, but on our way to the underground we were stopped by Wizarding World (AKA Pottermore) for an interview. We actually ended up in their video at the beginning! I'm mostly looking uncomfortably at the camera. So awkward. 😜

We had completely forgotten to have our picture taken in the giant Lego Ford Anglia, so as our interview took place in front of it we joined the queue for a picture, and then had one in front of the sorting hat too. Wizarding World have been teasing a new sorting quiz, and I am NERVOUS. I am not ready for another identity crisis! 😂 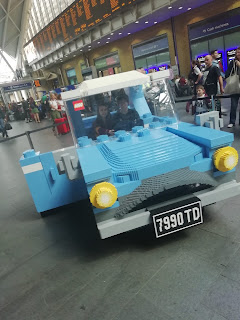 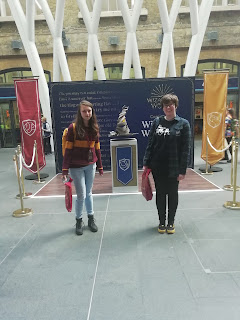 On our way to the underground (again!) we made a short detour to see Euston Station: Harry and Ron fly in front of it in Chamber of Secrets! 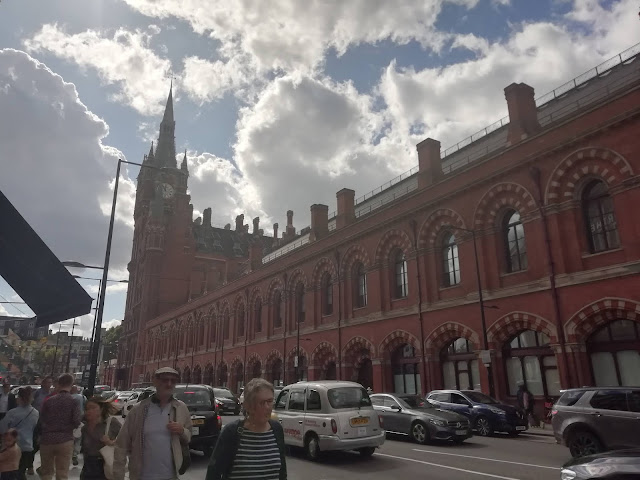 After going a bit wild in Noble Collection (whoops!), we had a lot of fun on our walking tour, seeing all the locations from the films! My next post will be all about that, so expect many more pictures!

Hope everyone has a magical weekend. ⚡