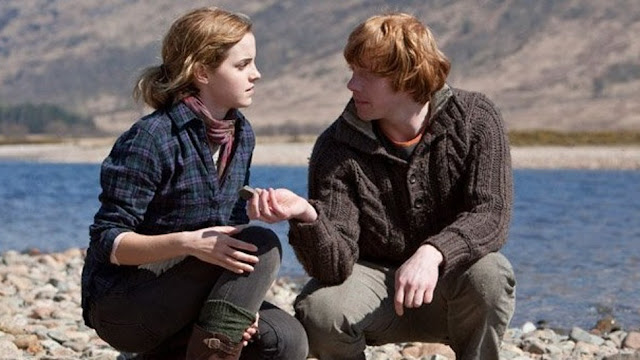 Sorry I've been The Worst™ lately - I am focusing all my energy into my new job and SpeakBeasty! I know I mentioned in my previous fanfic that I was hoping to do a mini NaNoWriMo with fanfiction, but unfortunately that didn't happen. This is what I had planned for the first day though, a little happy Halloween Romione fic! It's been sitting half-finished in my notebook for a few months so I thought while I had some time over the holidays I'd get it posted!

I'm not sure how much I'll be keeping this blog updated as life often gets in the way, but if you'd like to hang out you can usually find me having feelings on Twitter and posting fanfiction on Archive of Our Own!

Ron's hair glows in the light of a hundred candles, making it look like his whole head is on fire; like he is candle number one-hundred-and-one. The tip of his tongue sticks out of the corner of his mouth, his whole face screwed up in concentration as he carefully carves his pumpkin.

It was Hermione's idea: a pumpkin carving competition. She's been reminiscing a lot lately, with it being 10 years since they started at Hogwarts. A whole decade since she found her best friends and the love of her life. She wanted to surround herself with pumpkins, and candles and food, just like their first Halloween together. They might skip the live bats and troll in the dungeon though.

She would never have imagined then that in 10 years time she'd be sitting at a kitchen table, at their kitchen table, with the annoying boy who always teased her. Her lips twitch, desperate to show the smile she's trying to hide.

"What are you smirking at?" Ron asks in mock anger, pointing his knife at her. "Not thinking of cheating, are you?"

"Of course not!" She answers indignantly, "I'm going to win fair and square."

"Oh, really?" He raises an eyebrow and a blush creeps up her cheeks. He always knows how to push her buttons.

"Absolutely!" She performs a bit of tricky charm work under her breath and spins her pumpkin around to face him with a flourish.

"Blimey, Hermione!" He gasps. Her beloved Crookshanks has been delicately and artfully reproduced in miniature. As Ron watches, the cat blinks up at him and begins pacing around the surface of the pumpkin, looking for a mouse to pounce on. The real Crookshanks leaps onto the table and starts pawing at his pumpkin counterpart.

"How did you do that?" Ron asks, his mouth open in astonishment, wonder written in every line of his face.

"Oh just a little charm I've been practising." Hermione waves off the praise, but can't hide the pride in her eyes. "Have you finished yours?" Ron looks down at his carving and grimaces slightly.

"It's definitely not as good as yours."

"Show me!" Hermione walks around to table to where he has been working, pausing to elbow him in the ribs. He grins toothily down at her, setting her smile off again. He always has that effect on her, no matter how hard she resists.

Now it's her turn to gasp. Ron has carefully (albeit crudely) carved 5 words into his pumpkin: Hermione, will you marry me?

She turns, her eyes wide, to find him down on one knee holding a ring box.

His grin is so big it splits his face in two, and she briefly wonders whether his face will hurt in the morning. In the heat of a hundred candles, he spins her around the room, slow dancing to music only they can hear.

"So...does that mean I won?" He whispers in her ear, laughing and lunging out of the way when she aims a punch at him.

She didn't know it was possible for someone to be so incredible and so infuriating at the same time.
Labels: Fanfiction Harry Potter